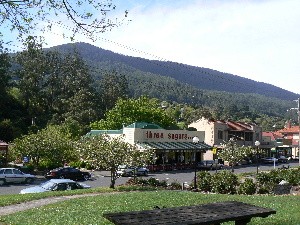 One of the things that has been a profound delight for us, as Appreciative Inquiry practitioners, is making rich and warm connections with other practitioners from around the globe.

And over the weekend one of these global relationships became local.

Last April, at the World Appreciative Inquiry conference in Ghent, we met Susan Koshy from Chennai, in India. Susan participated in the Tai Chi sessions that Chris ran each morning before the conference sessions began. He and Susan later connected through Facebook and we’ve continued the connection with her virtually.

And now, many months later, Susan and her husband, KV,  are currently visiting Australia. So of course we couldn’t let an opportunity to catch up with them pass us by. :)

On Saturday, a beautifully warm and sunny day here in Melbourne, we collected them from where they were staying and took them out for the day. Susan had seen some of Chris’s photographs of Warburton and had told him she’d like to see the place. This is an attractive small town on the Yarra river, about 70 kms east of Melbourne city and a 40 minute drive away from where I live. It’s a favourite spot Chris and I use when we want to do some planning in a more creative environment than an office.

So that’s where we headed with our visitors for the day – a day of sunshine, great conversation … and Appreciative Interviews!

Susan has undertaken to record interviews with a number of AI practitioners around the world about their experience with AI. So, after a brief lunch at Three Sugars, a Warburton café, we took picnic chairs to the shade of a tree by the river where Susan took out her video camera to interview Chris and me. It was an informal conversation, with a background of trees rustling  in the breeze, the river running by and the occasional call of a bird.

It was a great experience to be interviewed ourselves,  because our usual involvement with AI interviews is facilitating the process for others.  It was also another reminder for both of us that, as interviewee rather than interviewer, it can be very hard to remember exactly how you responded.   Susan has promised to share the resulting video with us, so Chris and I are both looking forward to finding out what we actually said   … :)

A leisurely and scenic drive through the nearby Dandenong Ranges, with a stop for coffee in a cottage café, completed the day before we dropped them off again at the home where they were staying. 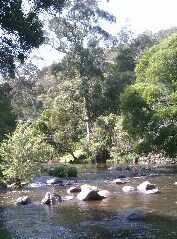 It was a wonderful day – great weather, wonderful company and stimulating conversation. And perhaps a ‘day with a difference’ too, because apart from the scenic route we took, we didn’t do as one usually does with international visitors and take them to see the more well-known tourist attractions.  That certainly didn’t matter though. We all very much enjoyed the experience of a relaxing and fun time in each other’s company, strengthening the connections we’d begun so many months ago in Ghent.

So a connection between residents of Australia and India began in Belgium and was deepened in the little Victorian town of Warburton.

Yet another example of how this world is shrinking – and what unites us all in spirit is far more powerful than what divides us geographically.