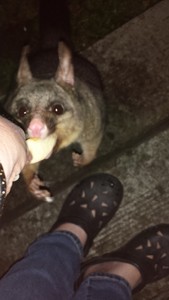 Living in the foothills of the Dandenongs, as I do, some of my very close neighbours are the possums that use my fence as a pathway from one place to another … and rattle around on my roof at night too! :)

I know it’s frowned on by some, but I’ve taken to providing pieces of apple for them on some evenings as they pass through. While mostly they will come down from the fence to collect their treat if I throw it towards them, a couple have become brave enough to venture up to my back steps and take a slice of apple from my hand.

One night, recently, I decided to take my mobile phone with me and try to capture a photo or two. And I can say from experience, it’s not easy to juggle phone, camera app and apple with only two hands. :) In my attempt to get an even better shot at one point, I made the mistake of concentrating on taking the photo and not having an apple slice ready.

Well … that was a mistake! Rather than posing peacefully for his photo, the possum decided my hand holding the phone looked a promising treat  … and sank his teeth into my fingers! I’m not sure who got more of a shock. I found my fingers gripped in sharp, vice-like teeth and the possum no doubt discovered I wasn’t as tasty as he’d anticipated!

What ensued were some very loud yelps and choice words (me) and a startled release, scamper and retreat to the fence (the possum).  The lure of apple proved strong enough for the possum to forgive the breach, fortunately. And I certainly understood the lapse on his part.

After all, I do know that possums may look soft and cuddly, but are still wild creatures and can be aggressive too. I’m pretty sure this particular fellow is the one who  snarls and chases some of the others back to the fence so he can get the lion’s share of what’s on offer! :) Though I think in this case his snatch at my finger was quite unintentional – and his reaction was as much due to fear as anything else.

So, while I still offer apple treats, I won’t be so foolish again to let my fingers be confused with food.

And why was I prompted to share this story on our business blog, you may wonder?

Well the experience got me thinking there might be a few reminders here … rather like the cat video that inspired our Animal Logic: Thinking Outside the Box post. :)