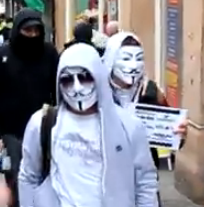 Human nature is a complex and ever-rich source of fascination. :)

Anonymous is the name of a group associated with international ‘hactivism’, as well as other forms of social protest and activism in many countries of the world.  With indivudual anonymity preserved in computer code, behind virtual walls or behind the carnival masks they wear in public, they have been involved in such major social protest activities as hacking government websites, Wikileaks and the Occupy movement.

A quick internet search indicates that love ’em and hate ’em responses to Anonymous abound. Some folk cheer them for their subversion and their propensity to challenge the ‘big guys’ and the status quo. Others see red, judging them as dangerous anarchists and a social evil.   Different reactions reflect each end of the spectrum – and indeed all shades in between. And for some, like Ray Walters, the jury is still out.

So are they to be feared as violent disrupters of social cohesion? Should they be lauded as heroes fighting for justice and freedom of speech? Or are they, to use Ray Walter’s words, simply disillusioned youngsters?

Perhaps the wonderfully complex truth is that they are all of these and more. :)

And the video below from YouTube certainly gives us a taste of this complexity!

On 23d February this year, Anonymous took to the streets of Liverpool in the UK to join in a protest against alleged tax dodging.  It was one of those typical loud and angry protest marches, complete with waving placards and booming loud-hailers. And this time, because it included members of Anonymous,  it also included lots of those scary masks.

But then something shifted – and a homeless man sitting by the side of the road  was the catalyst.

Into the midst of anger and protest came a brief oasis – a few moments of kindness, tears, hugs and deep humanity.

For us the clip also held intriguing symbolism about the wearing or discarding of masks. :) And, in fact, there’s even a delicious irony about the Guy Fawkes mask Anonymous members have chosen as their customary disguise.

Whatever you may think of Anonymous – of their activities globally or even their actions in this clip – we hope you will be as fascinated as we were by this example of human nature in all its diversity.